"This is a fantastic plan, with only two minor errors; how are we going to get there, and how will we get back?" 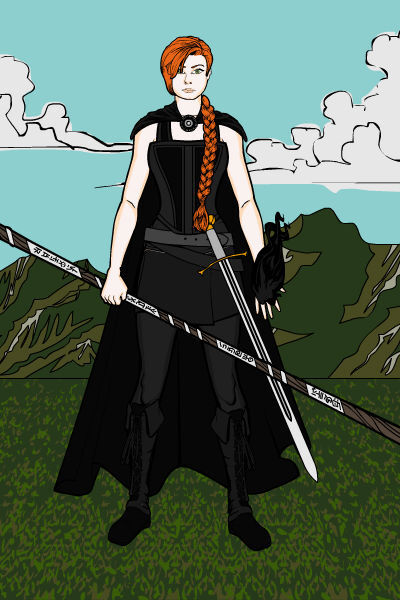 Morwenna is a highly valued member of the Triad's Eye and is respected for her intelligence. She can even compete with Velgor for the title of the cleverest Triad's Eye member. She is one of the few people who has managed to make Velgor accept that he might be wrong, and she has done this on multiple occasions, as she has a knack for almost always being right when she believes to be absolutely sure of something. Morwenna is probably the most sensible member of the Triad's Eye and insists on making all of their plans foolproof. Naturally, this rarely works as the Triad's Eye's plans are inevitably very complex and involve thousands of incalculable variables, but they have often been made safer by Morwenna's insistence on thinking before doing.

As the daughter of an Yggdrasilian spirit, Morwenna is blessed with powers of witchcraft beyond what is normal for a Human. She can heal wounds, draw the life force out of her enemies and, of course, turn them into various species of small amphibians. As the Torlan'Dastron military school does not recognise witchcraft as a military discipline due to the lack of witchcraft teachers there, Morwenna was forced to choose another fighting style to accompany her magic and decided to go with swordfighting. While she is not as skilled with swords as she is with magic, she is capable of holding her own with a sword and likes to use one facet of her training to complement the other.

Morwenna is the daughter of the Human, Piran, and Tanwen, a spirit. She was born in Caer Annwyn on Yggdrasil when Tanwen came through the spirit gate in that city and chose Piran as her spouse. As refusing this offer would result in all of Annwyn cursing his name, Piran was forced to accept. As a baby, Morwenna was much revered in Caer Annwyn due to her parentage, and she and her father received much attention because of this. For an unknown reason, Morwenna's mother, Tanwen, returned to the spirit plane shortly after Morwenna's first birthday, and shortly after Piran and Morwenna moved to Ignos to start a new life. In school there, Morwenna befriended Velgor and Addaon, two future members of the Triad's Eye. When Ignos was destroyed, her father was killed in the fighting but Morwenna managed to escape along with the 126 other survivors. On Torlan, she was adopted by Sirekka Kinian, who would also become a member of the Triad's Eye in the future. Morwenna taught herself to harness her powers of witchcraft via the Triadnet, and was taught sociology and swordfighting at school. When Eskyriax decided to put together the Triad's Eye, she joined along with her adopted mother and dedicated herself to battling corruption in the Triad.

Retrieved from "https://triadnet.fandom.com/wiki/Morwenna?oldid=4909"
Community content is available under CC-BY-SA unless otherwise noted.